The Blue Ribbon Panel (BRP) report that assesses the ten societal grand challenges that Ethiopia should understand and improve on in the coming decades has recommended the formation of Megapolis (Mega cities) and the commencement of the national service.
The document which was compiled through professional study was presented at the Ethiopian 2050 Conference on December 2019. The document focused on ten pillars that the country should pay close attention to in order to improve and prepare the country in relation to population growth and global situations. The document was presented before government and policy makers for their consideration.
The high profile experts who were gathered at the conference at the time also contributed in their expertise in the economic, social and other relevant areas.
The compiled document which will be presented through a webinar session on the 31st of October with a participation of close to 500 people from Ethiopia and abroad indicated that by 2050, Ethiopia’s population is projected to double from 100 million to 200 million people.
“This powerful demographic transition will also be accompanied by several other transformative natural forces. These forces include pressure from ongoing societal, economical, geo-political, and environmental changes and disruptions,” it stated. 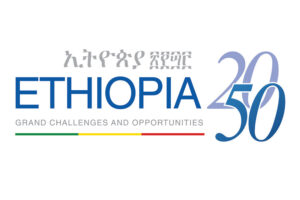 It added that the next set of potential conflicts in our region could be driven by the competition for valuable resources such as water and arable land that will be further exacerbated by pressure from population increase and adverse effects of climate change.
“Taken together, the next thirty years will reshape Ethiopia’s identity, character, and its global role, as it navigates both unprecedented challenges and opportunities. Therefore, we must face the full impact of these emerging forces head-on,” the document explained at its inception.
The BRP is consisting of an independent group of Ethiopian and Ethiopian-origin experts with diverse professional backgrounds.
These professionals bring deep expertise across fields such as economics, public health, statistics, education, population dynamics, technology, and urban planning. Together, they have formulated a transformative vision to proactively aid Ethiopia on its journey towards a better future.
The BRP rests upon a collective vision that is part of the broader Ethiopia 2050 Initiative and focuses on the actions that policymakers can take, with broad support of the public. Their insights were generated after extensive and careful vetting of the transformative new ideas presented at an international conference held for two days from December 19, 2019 with over 450 participants from ten countries.
Rapid urbanization, water-food-health-energy issues, job creation, institutional and civic development, gender equality are the major areas that are included in the document with related topics.
It recommended proactive strategies to manage growth in the rural areas and aid the urbanization process in the cities. It discloses that the establishment of megapolis will create city clusters vital for organized development.
Mega City Model capitalizes on agglomeration economies and de-concentrates growth away from Addis Ababa but requires building a system of cities to fully leverage urbanization for economic transformation and radiate growth to the wider rural areas and regions.
“Mega-Cities are economic engines that governments, consumers, and businesses can share benefits through effective megalopolis integration,” it explained by showing the beginning of formation of one such described as the ‘mini-megapolis’ between the cities of Addis Ababa, Dukem, Bishoftu, Mojo, and Adama is already being realized , that is the Addis-Bishofu-Adama cluster.
“With the recent introduction of the Addis-Adama expressway, further evidence is emerging that an increasing number of people are commuting daily between these cities and, in the process, expediting the process towards an inevitable emergence of a new mini-megapolis around the Addis-Bishofu-Adama cluster,” it said.
According to the document, the newly planned USD 5 billion international airport near Bishoftu with 120 million passenger/ year capacity, together with the development of supporting infrastructure has significant potential to further speedup this megapolis formation. This potential megapolis will almost certainly become a ‘mega-capital’ with a major part of the country’s economic activity, particularly manufacturing and service, concentrated within this parts.
Additional urban-clusters around the country such as Gondar-Debarq-Debre Tabor cluster, Bahir Dar-Wereta cluster, Dessie- Kombolcha cluster, and Hawassa-Yirga Alem-Shashemene cluster are stated as potentials.
It states that on the formation of mega cities, farmer-friendly policies, strategies, and programs should focus on; encouraging the continued existence of these farmers and their lands across the corridors through zoning laws and thoughtful planning of roads and other infrastructure, offering fair ownership and sharing of wealth generated where the land is converted to urban areas or infrastructure, and involving the concerned communities in the planning process.
On the process the paper also recommended the development of effective institutional arrangements and governance systems to manage emerging mega-cities.
The document has also added the ratification of ‘national food, water, health and energy security charters.’
It said that the guarantee of food, water, health, and energy security in Ethiopia should be based on the recognition of these basic human rights, with a goal of achieving universal access in these areas for all rural and urban households. 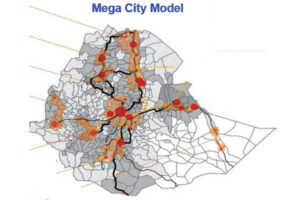 Regarding water security the document recommends to; establish watershed management policy master-plans, immediate remedial rehabilitation measures, and community-based watershed management. Similarly health and energy securities have got priorities in the document.
It added that the establishment of “Digital Literacy Charter” will serve as the corner stone of digital policy. The digital literacy charter ensures social participation and this document also highlights basic digital skills such as using computers and accessing digital information as a national necessity.
Rural development, building world-class workforce trainings that will enable the country to create a competitive society, massive transport infrastructure to harmonize the demanded growth, empowering the construction industry, advanced manufacturing industry, sustainability and environment security are stated as a challenges that will be tackled in a holistic manner.
The document added that institution building was identified as a critical and key component, for all the recommendations for the grand challenges to be successful having a long-lasting impact.
The document also recommends the establishment of the ‘Good Governance Charter as well as the Introduction of the ‘Voluntary National Service.’
It explained that data from countries that have a strong culture of national services like Singapore, Korea, and Israel clearly show that national services contribute significantly towards nation building and innovation.
“We propose a similar initiative in Ethiopia with some unique characteristics that factor in the current conditions of the country. The ‘National Service’ will be voluntary and will be available to the young between the ages of 18-25, after secondary school or after completion of a tertiary education,” the document added.
According to the recommendation it will have the components that the service will last for a period of 18 months, and the public and government bodies that volunteers can join different services.
The mandate of the Blue Ribbon Panel was to write a comprehensive consensus report that outlines credible, relevant, and pragmatic ideas and practical strategies to address the 10 Grand Challenges and Opportunities identified by the Ethiopia 2050 Initiative. These ideas and strategies have been presented to some government bodies. They will also be disseminated widely to Ethiopians both in Ethiopia and aboard.
The Ethiopia 2050 Conference held on December 2019 was co-hosted by the Joint Ethiopian Engineering Professionals’ Association, Ethiopian Science Academy, Ethiopian Economic Association and Unity University at the Skylight Ethiopian Hotel.