The Ethiopian Communication Authority (ECA) is under preparation to float an international tender that would enable it to select two international telecom firms that will operate in Ethiopia. ECA plans to grant two licenses for international telecom firms by end of this year. As part of the national telecom liberalization reform program the authority invited international telecom firms to submit expression of interest which are interested in operating in Ethiopia. Accordingly, 12 telecom companies presented their expression of interest. Three major telecom operators – Vodafone, Vodacom and Safaricom – created a consortium dubbed Global Partnership for Ethiopia that would bid to win a license in Ethiopia is among the list of companies that submitted expression of interest. Etisalat of the UAE, Axian, a telecommunications company based in Madagascar, MTN, the South African telecom giant that operates in 24 African and Middle Eastern countries, Orange, the French telecom firm, Saudi Telecom, Telecom SA of South Africa, Liquid Telecom of Mauritius and Snail Mobile from China have submitted their expression of interest to ECA. Two companies which are non-telecom operators – Kandu Global Telecommunications – and Electromecha International Projects have also expressed their interest. Another company from neighboring Djibouti-Group of Associate Djiboutian Inventors (GADI), have also expressed its interest. Balcha Reba Director General of ECA discusses how the Authority is planning to go further. Excerpts;

Capital: What is national roaming?
Balcha Reba: National roaming is a principle that refers to the agreement among operators to use each other’s network to provide service in areas where they have no coverage. Customer of one operator can freely roam the network of the other operator to make and receive calls based on the agreement between the two operators.
For example, international roaming enables customers to; make and receive calls, send and receive data, and access mobile services using their own Sim card when they are traveling outside the geographical area of their home network by using the infrastructure of their visited network based on the agreement the two operators made.
When the new operators arrive in the country they will have their own customers with an infrastructure of their own network. However, it may take about a year to cover urban areas so the rest of the rural areas will be aided by Ethio telecom networks until they finish building their network. So according to the national roaming principle, these new operators can use the existing Ethio telecom’s network facilities. 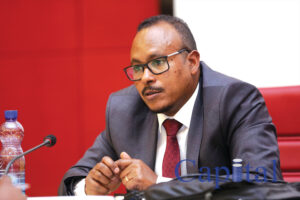 Capital: How is the authority responding to the requests of the new operators in relation to building infrastructure and other facilities?
Balcha: Since building networks requires new build for every premise the authority is developing regulations for telecom operators. The regulation aims to address policy barriers on how to use land and buildings for telecommunication lines. It also stipulates on the negotiation terms with regional governments, city administrations as well as individuals.
Article 32 of the regulation assists the operators on how to request, what kind of agreement they should make, and what requirements they ought to fulfill. Moreover, if there is any difficulty they can easily approach the authority for further guidance.
Similarly, the authority has currently finished preparing a document that states the prices with regards to the use of land and buildings for telecom lines. The price caps were made after thorough discussing with the regional government and the two city administration.

Capital: How many towers currently exist in the country?
Balcha: Currently, there are about 7,200 towers. However an additional 14,000 towers are needed to make the service more efficient. The additional towers would go a long way in strengthening Ethio telecom’s network coverage capacity.

Capital: There is new practice on drafting regulations, how are you coping with this?
Balcha: Whenever you draft new standards, the public must be consulted albeit it takes time. Furthermore, the new administration law also mandates this. 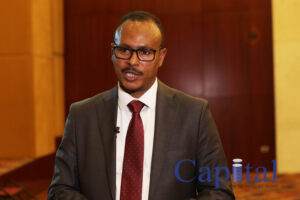 As from October 2019, we have been taking feedback from different stakeholders before going to the approval of every regulation. In addition, we have used different methods including digital forms to assist us in making a wholesome decision.

Capital: Are there any plans on starting the 5G network?
Balcha: 5G network is still an ongoing process in many countries including countries like the UK, South Korea and so on. When we come to Ethiopia, at a frequency level the decision to upgrade has already been accepted. However, to rout the network takes a lot of process which include equipment and devices which are related to the industry. Therefore we can say the process to operation is on track. We have also identified 5G service frequencies on the national frequency allocation table. Therefore, it is just a matter of time.
From our country’s condition it will take time for the mass adoption to 5G. This is because it is still difficult to fully service 4G networks. It has taken us time to graduate from 2G to 3G and 4G. Some of the issues setting us back are; National capacity, society awareness, income condition and digital literacy. There is still high notable usage of 2G networks, therefore we have to transition this users to 3G and 4G before embarking on 5G. This can be done by increasing the smart phone supply which in turn increases 3G and4G consumption and eventually 5G. Getting ready for school

Investing in the future