Five high-ranking members of the exiled opposition party the Oromo Democratic Front (ODF) arrived in Addis Ababa early Wednesday for a second-round of talks with the government.
The popular political figures are now back with a new political party, the ODF, which held its first-round talks with the government in April in the US.
The five-member team includes Lencho Leta and Dima Negewo, ODF chairman and deputy chairman respectively – two hugely famous names in Ethiopia’s political landscape – as well as Hassan Hussein, foreign relations head, Lencho Bati, head of organizational affairs and Beyan Asoba, the spokesperson.
Previously, Lencho Leta was in Ethiopia in 2015 to negotiate with the government but the negotiations failed.
A statement from ODF reads ‘after several years of relentless efforts to engage the Ethiopian government, the much anticipated day has arrived with great excitement’.
The statement further reads ‘the Oromo Democratic Front (ODF) decided from its inception to pursue the path of nonviolent political struggle to defend the rights of the Oromo and other peoples, and secure freedom, justice, democracy, and prosperity for all Ethiopians. Accordingly, returning to our country and establishing itself among its constituents at home, and establishing a legal status in order to play its part in our country’s democratization has been and continues to be the ODF’s highest priority. To this end, we hope our discussions with the government will be fruitful’.
In his Tweet Fitsum Arega, Chief of staff at the Prime Minister Office said that the Prime Minister met with officials of ODF at his office on Thursday May 24. ‘PM Abiy Ahmed met today (May 24) with the leadership of ODF. ODF leaders agreed to participate in #Ethiopia’s political discourse peacefully. Both parties agreed to work together with a singular focus on fostering #Ethiopia’s national unity and deepening our democratic process.’
The ODF was established in 2013 having broken away from the country’s oldest opposition political party, the Oromo Liberation Front (OLF) – the latter remains a banned group under the law.
The ruling EPRDF coalition in January 2018 announced that it was set to undertake political reforms which included opening up the democratic space and guaranteeing more political freedoms.

The balance of global economic power

The White Line Between 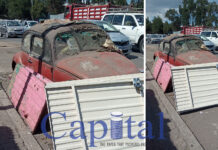