From kids to elders, workers to students, the Diaspora to foreigners, civil servants to non-governmental organizations, and people across Ethiopia came together last Monday to plant 353,633,660 trees in one day. Most government workers on the day traveled around the country to plant trees.
The initiative followed PM Abiy Ahmed’s call to the nation to take part in the green initiative he launched in May 2019 to reverse Ethiopia’s depleted forestry by planting 200 million trees in a day. The public responded by planting an extra 100.5 million seedlings consisting of a variety of species.
Oromia Region planted 211.9 million seedlings, Amhara and Tigray regions planted 70.5 million and 9.5 million trees respectively. Addis Ababa planted 3.5 million trees while Somali, Afar, Gambela and Hariri planted over 2 million trees. Benishangul and Dire Dawa planted 1.4 million and 258,993 trees respectively. The PM who went to Wolayita to plant on the historic day thanked the public who participated in the mass tree planting.

“From the bottom of my heart I really thank my people who planted over 350 million trees in a day, which is something the world has never seen. We must continue to do this; we must fight climate change which is destroying our planet,” the PM said in his address to the nation.
One group that took part in the green initiative legacy was the National PolioPlus Committee (NPPC) together with Rotary family in Ethiopia, WHO partners and allies in polio eradication initiatives. A team of over 350 people gathered Saturday 27th July morning and planted seedlings at Entoto Park under the theme: “All trees planted will grow! All children immunized will glow!” and raised awareness about Polio and immunizing children.
The PolioPlus Committee carried out this project in partnership with the Ethiopian Heritage Trust who availed part of the land under its care at its Entoto site and indigenous seedlings for the Rotary family to plant. The Trust will take care of the seedlings planted ensuring the survival of all trees.
Teguest Yilma, Chairperson of NPPC said the Rotary family, Rotarians, Rotaractors, and Interactors present are very happy to participate in the nationwide green initiative launched by the PM and place its footprint. She further said that it’s also a great opportunity to advocate polio eradication initiatives and raise awareness to the community on polio emphasizing the importance of children immunization all around the country.
Mesobework Ketaw, Director of the Ethiopian Heritage Trust said the organization has covered more than 500 hectares in Entoto with trees which will create a favorable environment to live there.
“Nearly 1,300 hectares of land were given by the government some 27 years ago and we have done a good job in conserving the soil and planting different kind of trees and this will help animals like Antelopes, Deers, Wolf and Cheetahs to come back again. Planting trees helps people and saves animals from migrating from one place to another.”
Dr. Mumba Mutale from WHO Ethiopia office expressed his appreciation with the government’s initiative to build a green Ethiopia. “It is a good plan to plant trees and it is important to create a conducive environment for children to grow healthy. WHO will continue to support the government program, as well as NPPC and Rotarians who are working to end polio.
Rotarian Mohammed Idris, NPPC communication consultant, said like the trees, all children should get proper care. “Trees need proper care to grow and children need proper feeding and medical check-up to pass to the next stage of life; so administering polio vaccination to children is mandatory. We will make Polio Eradication Initiative historic by setting a landmark for polio eradication endeavors here at Entoto park,” he noted.
The goal of PolioPlus program is the global polio eradication. Rotary is the leading non-governmental voluntary organization contributor to the Global Polio Eradication Initiative. Rotary worldwide has mobilized a legion of volunteers who are providing support during vaccination campaigns, mobilizing their communities for polio eradication activities, raising funds and awareness for polio eradication, and advocating for the cause with government officials. In Ethiopia there are 19 Rotary Clubs with over 400 members. 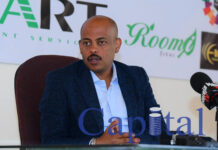