Tulip Inn, a four-star brand name hotel which is a subsidiary of Louvre Hotels Group signed its first deal in East Africa. Olympia Hotel will be opened in Addis Ababa after renovations are completed on an already existing hotel. Louvre Group has other brand name hotels in Addis Ababa.
Kumeger Teketel founder and CEO of Ozzie noted that there are now thirty brand name hotels in Addis Ababa. He believes that as more high standard hotels come into the country and people see the difference that management and practices in the hospitality industry will improve, eventually leading to Ethiopia being registered on the global MICE map.
“As MICE infrastructures in the country are accelerated we will fulfill the basic element of standard hotel services,” he said.
Previously the facility was known as Watergate Hotel and was owned by, Habtu Mulialem. He owns MSN, a company which exports cereals. The building has 12 storeys and a large parking lot. The facility will include 109 rooms, two restaurants, one bar, one coffee shop, meeting rooms, steam bath and gymnasium.
“Olympia’s amazingn location in the heart of Addis Ababa offers restaurants and clubs”, the group expressed in its statement sent to Capital.
The Group works in 10 sub-Saharan African countries and is known for its Golden Tulip, and Royal Tulip Hotels. They have 2800 rooms in sub-Sahara Africa. They plan to invest even more in sub-Saharan Africa by opening one hotel per quarter and signing one new deal each semester for three years.
Louvre Hotels Group is a major player in the worldwide hotel sector with 2,500 hotels in 52 countries. The group is known for its variety of star collections and is a subsidiary of Jin Jiang International Holdings, one of the largest tourism and travel conglomerates in China.
The mid upscale hotel is expected to start re-operation within two months and will create 175 jobs when it opens.
Ozzie brings 17 brand hotels to Ethiopia. Thirteen additional hotels are in the pipeline and 38 are under the negotiating process.

NBE buys gold worth $72 mln in a month 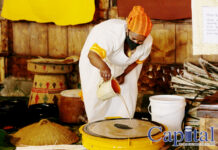