Sometimes I go to a development or donor organization to discuss possibilities of partnership or funding for projects and chances are that the answer is that their focus has changed and that they now support different kinds of activities than before. In development cooperation we saw the shift from implementation of integrated programs to the building of local capacity, which was probably a good idea, but it should not surprise us when we see that the pendulum is swinging back again and that there is a need for more direct project implementation shortly. We in fact have seen this happening in Ethiopia over the past few years. Things are no different in the private sector where all sorts of developments and factors force companies to rethink their business strategies.
The term turbulence has been with us for some time now, but times are becoming more turbulent still, especially in the current environment of management. Managers therefore better be prepared and become comfortable dealing with turbulence and continuous change. The pressure is on and while we need to increase productivity, learn, continuously improve and achieve success, we undergo the pressure of change and stress.
So, watch out for the word “change”, whatever organization or business you are in. Some change is radical as it results in major make over of the organization, including restructuring. Radical changes are often initiated by a critical event, such as new ownership or a dramatic failure in production or sales. Radical change does not happen very often in the life cycle of an organization. When it does occur however, such a change is intense and all-encompassing. Sometimes, the survival of an organization depends on the ability to undergo successfully the effects and demands of radical change.
A more common form of organizational change is incremental change. This is change that occurs more frequently and less traumatically as part of an organization’s natural evolution. Typical changes of this type include new products, new technologies and new systems. Although the nature of the organization remains relatively the same, incremental change builds on the existing ways of operating and seeks to enhance or extend them in new directions. The capability to improve continuously through incremental change is an important asset to organizations in today’s demanding environments.
Change can be directed towards a wide variety of the organization’s components like mission, strategy, structure, workers, objectives, culture, tasks and technology. We must however realise that planned change requires that managers recognise that these components are highly intertwined. Changes in technology often require changes in structure, communication and tasks of workers. Changes thus affect the organizations’ people, the basic components of the organization. Workers may for example need to acquire new knowledge and develop additional skills in order to perform their modified roles and work with the new technology.
Change may be viewed as a process that includes several phases, while managers need to ensure that each of the three phases are sufficiently addressed. They are:
Unfreezing or getting people and things ready for change.
Changing or implementing the change.
Refreezing or making sure that the change sticks as part of new routines.
Now, no change comes without resistance, which is often viewed as something that must be overcome in order for change to be successful. This is not always the case. The people who resist change may be defending something important that appears threatened by the change attempt. Reasons for people to resist change include but are not limited to the fear of the unknown, the need for security, no felt need for change, threatened vested interests, poor timing, and lack of resources. To minimise resistance, we need to make sure that the people who are affected by the change know specifically how it satisfies the following criteria:
Benefit. The change should be perceived as a better way.
Compatibility with the existing values and experiences of the people who are being asked to change.
Complexity. The change should be as easy as possible to understand and use.
Triability. The change should be tried out on a step by step basis, while adjustments are made as things progress.
In general, resistance to change will be managed best if it is recognised early in the change process. Education & communication, participation & involvement, facilitation & support and negotiation & agreement are general approaches for dealing positively with change. Regardless of the chosen strategy though, managers must understand that resistance to change is something to be recognised and constructively addressed instead of feared. A manager should deal with resistance to change by listening to the feed back of the resistors and acting accordingly.

Who is in control?

Andualem, Eskinder among the 746 prisoners to be released 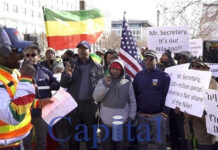 Ethiopians protest against US involvement in GERD 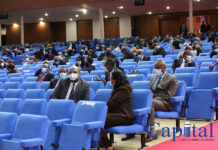 Women leaders rise in solidarity to save lives and protect livelihoods

The future of plastic business