For the first time a full fledged private mortgage financial firm is getting ready to launch with the help of major financial businesses and other players. Besides the Housing and Savings Bank this would be the only other mortgage bank in the country.
The current name is Goh Betoch Bank Share Company. It is under formation by prominent organizers and being chaired by Getahun Nana, former Vice Governor of the National Bank of Ethiopia and short term president of the state owned Development Bank of Ethiopia.
The prospects indicated that Goh would be the first after the Housing and Saving Bank (HSB) that was formed by the merger of Imperial Savings and Home Ownership Association and the Savings and Mortgage Corporation of Ethiopia mid 1970 during the Derg period. HSB was also reconstituted to Construction and Business Bank in 1994 before it became defunct and merged under the state giant Commercial Bank of Ethiopia in 2016.
The prospectus stated that because there has been double digit economic growth for ten years, the poverty rate has decreased, urbanization has expanded and the per-capita income of citizens has increased.
It went on to say that urban growth and the 2.5 percent population growth rate in addition to the facts mentioned above increased the demand for housing in cities so housing has become a major issue. The prospects stated that every year 100,000 houses should be constructed to replace the old and meet the growing demand for new homes.
It argued that even thought the government, investors and residents have worked to solve the problem, more effort was required.
Finance is a huge problem for the sector. The Goh prospectus mentioned the 2016/17 budget year National Bank of Ethiopia data that indicated that the construction sector accessed only ten percent of the total loans and advances. “It shows that the housing project is getting very little attention from financial institutions,” it said.
“Due to that a financial firm that focuses on mortgage is a must,” it argued.
Goh plans to be a mortgage bank at first and may transition to other banking business in the future.
The bank indicated that it would cover the total investment cost of shareholders by the fifth year. “The profitability would be six percent in the first operational year, 17 percent in the second and 31 percent in fifth year,” the prospectus explained.
Construction, repair and improvement of residential houses, and purchases would be the major business it serves. It would carry out all activities related to mortgage operations like forming a side business including establishing a construction company and insurance business.
Constructing houses for sale or rent and providing consultancy service for housing scheme have also included under the prospects of the under formation mortgage bank.
To realize its strategy it will encourage housing projects, support the government in studies for the ratification of favorable government policy, laws, regulation and researches.
It is also expected to undertake other banking activities for instance support on the import and export, international banking service and forex, bank guarantee besides providing interest free banking services.
Goh Betoch will offer one million shares worth one billion birr with a single share of 1,000 birr.
The minimum share that can be bought would be 50 shares worth 50,000 birr and the maximum share ownership is as per the central bank rule of five percent that is in this case 50 million birr. Half of the total purchased share would be paid automatically with five percent interest rate and the balance will be settled within 18 months after the formation of the bank.
The under formation bank organizing committee that has nine members is chaired by Getahun Nana; Gebreyesus Egata, founder and CEO of Gift Real Estate, Kefeni Gurmu, legal expert, Wubishet Jekale (PhD/Eng), Professor at Addis Ababa University and General Manager at Jekale CM Consultancy, Heyaw Terefe (PhD/Eng), Professor at Addis Ababa University, Yoseph Assefa, well known on the financial industry, Fasika Kebede, former president of Enat Bank, Amerga Kassa, former president of Nib International Bank, and Araya Gebreegziabher, former president of Wegagen Bank are the other members of the organizing committee.
Even though these days banks are providing some sort of financial schemes to obtain housing it is mostly focused on the upper class of the society that may have already the facility and want more or for those whose income is extraordinary, as opposed to the general public or civil servants.
The government has attempted to solve the housing problem for the past 13 years but demand continues to outpace supply.
About a year ago in its congress the ruling party, EPRDF, made a policy hinting that the government would follow some more schemes to solve the housing problem in the country. It indicated that the private sector including foreign companies and the general public via housing associations would be also involved in housing in addition to its condo scheme.
Since September there has not been a lot of activity. During the Derg era several urban dwellers mainly civil servants and housing associations benefited from a plan by HSB to own their property in cities and towns of the country. Even though the HSB loan scheme realized their wish to own houses, the scheme did not continue as usual after the fall of the Derg regime.
Since then the housing scheme has been neglected from the loan scheme of the financial firms until the condo housing project was introduced by the government in 2004, which is fully controlled by the government. Lease has been also the other option to secure a plot and construct residential houses, however it is not affordable for the masses. Experts argued that the condo housing project is vulnerable to corruption in the construction stage and lottery process besides poor performance in the accomplishment. 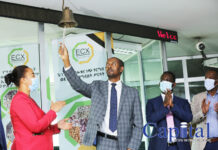 Dashen Bank stands with businesses, customers in these difficult times