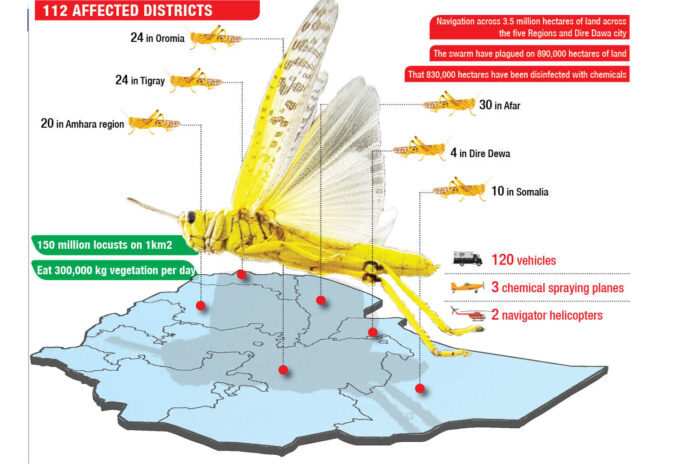 According to the United Nation Food and Agriculture organization (FAO), on average, once in every three years there is a locust infestation outbreak in Ethiopia. The outbreak stems back to the mid-1940s and 1950s, when desert locusts began infesting Ethiopia. Back then there were no effective defense mechanisms and this led to hardships and famine. Over the years there have been big improvements in the understanding of the atmospheric movement of the swarm. There have been efforts to bring the problem under control through using traditional methods as well as modern methods such as; using aircraft ultra-low volume spraying with new insecticides and different new tactics with effective means of control.
Even though these entire means have been introduced and aerial operations have continued against the swarm as from the end of 2019 till 2020, the rapid incursion of the desert locust across many countries of the East Africa region still poses significant damage to livelihoods and food insecurity of the region as the second wave continues to hit. 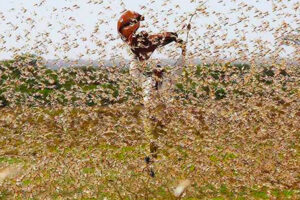 As experts suggest the current outbreak can be linked to anthropogenic climate change and the increased frequency of extreme weather events. The desert locust are considered the most destructive migratory pest in the world and a single swarm covering one square kilometers can contain up to 150 million locusts. On average, one desert locust could lay 80-120 eggs with in eight to twelve days, if the soil is wet enough to allow the egg to absorb sufficient moisture to complete its development.
A very small part of an average swarm accounts to a tonne of locusts. Each locust can consume two grams of vegetation a day and when this statistics is translated to an average swarm the damage is nothing short of catastrophic. In
Ethiopia being amongst the largest countries in the region, it has experienced a huge draw back to its agricultural sector as a result of the infestations. This has in turn rendered suffering to small holder farmers because of significant losses in croplands. The rainy season has also served as a double edged sword. On a positive side it provides a source of water for crops and cattle but on the flip side it presents a favorable condition for locusts to breed in the country. According to FAO, the current wave of the locust swarm in Ethiopia is the most severe in over 25 year period.
According to the Ministry of Agriculture, currently locust infestation has occurred in five regions and one city administration. The breakdown is as follows; for the city administration, the affected city is Dire Dewa, the regions affected include: Oromia, Tigray, Amhara, Somali and Afar. A further breakdown into the districts are; 20 in Amhara region, 30 in Afar, 24 in Oromia , 24 in Tigray, 10 in Somalia, 4 in Dire Dewa, which tallies to 112 affected districts.
As of July 2020, the swarm have plagued on 890,000 hectares of land according to the data from the Ministry. Abera Lema, Communications Director at the Ministry of Agriculture clarified that the Ministry has been doing its navigation across 3.5 million hectares of land across the five regions and Dire Dawa city. From the identified 890,000 hectares, he claimed that 830,000 hectares have been disinfected with chemicals to control the spread.
For the past 10 days the infestation has become adverse in the regional states and the federal government has been taking stringent measures. According to Abera, the Ministry is working round the clock to get the condition under control. This is being achieved through the use of pesticides including bio-pesticides by air chemical spraying through 3 chemical –spraying planes, two helicopter navigators and 120 vehicles operating from the four air bases of Kombolcha, Dire Dewa, Semera and Somali.
The current local plague has exacerbated the local economy and political limitations have facilitated the locust spread which has further put pressure on the livelihoods of communities. Though the country does not have a chemical spreading plane or drones the government has taken the initiative of taking three planes and two navigators on lease from other organizations. The government is still processing to bring other planes.
It is crystal clear that swift coordination in response will aid in the efforts of the outbreak. However, from the regional bureau of the Amhara, the affected hectares are 446,232 hectares of which only 184,499 hectare have been controlled. 123,000 hectares have been controlled by traditional means and the remainder by chemical means.
According to Tesfahun Admase, deputy head of the regional agriculture office in Amhara, clarified that 45,000 hectares of cropland have been heavily damaged with the main crops affected being teff and sorghum. According to FAO, since January 2020, the swarm of desert locust has damaged over 200,000 hectares of crop land and also recent assessments indicate that between December 2019 and March 2020 the locust damaged stood at 114,000, hectare crop land of sorghum, maize and wheat.
The politics between the federal government and the Tigray regional state has also contributed towards a worse situation of the infestation in Tigray Region. Michael Mirutse, communications director at the Tigray region rural development and agriculture bureau, expressed that the region is doing its best to combat the locust menace despite not receiving cooperation from the federal government. When Capital inquired if the region was using drone or planes to combat the menace, he argued by saying, “currently, we not using planes or drones. Quite the contrary, the beloved people of Tigray and Eritreans had purchased an Industrial Drone from Israel 5 months back but it has since been held by the federal government because of political issues.”
Despite the setback, Michael states that out of the 32,000 hectares infested by the locusts, 31,000 hectares is under control. He also added that the prevailing winds from Amhara and Afar region may threaten the spread. He really emphasized that the Ministry of Agriculture should gather the regions to a wholesome perspective regardless of politics because the swarm of locusts are not a respecter of boundaries.
Abera, in response to this also accused the regional agricultural bureau and expertise for not giving the needed information so that the government may offer the needed response. “The swarms movements are quick and regional bureaus are responsible in giving the information on its movements. This will help in giving controlling equipment such as air chemical spraying planes,” Abera stated. However, the Tigray Regional Bureau is not willing to give this information, he claimed.
FAO has suggested to the government to strengthen its surveillance data response team which is crucial in combating this menace. The government, inter regional and international governments are also providing support the forms of pesticides, bio-pesticides equipment and trainings. 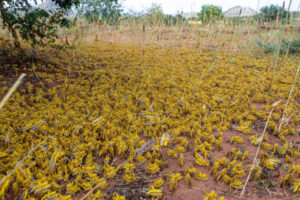 The desert locust control organization for East Africa is one the organizations that is responsible for such kinds of outbreaks but the organization seems to be neglected and under resourced by members.
The regional and intergovernmental organizations also fear that the swarm would lead to a considerable drop in agriculture produce worsening the food security and malnutrition in the country. According to the United Nations office for the coordination of Humanitarian Affairs, currently there are more than 19.2 million people in need of humanitarian assistant though the government has only targeted 15.1 million of them.
To cope with this, Abera mentioned that the government on short term response seeks to support the vulnerable by offering direct assistance to affected communities. In the long term response the government is planning to increase farming through irrigation to counter the vial loss of crops.
So far there are no efforts taken by the government to support the affected community, however according to the National Disaster and Risk Management Commission there is a task force established to support the situation which is awaiting the call of the Ministry of Agriculture.
FAO and IGAD expect desert locust infestations to continue threatening crop production and pasture regeneration significantly in most affected areas of Ethiopia and Somalia until at least March 2021.

Building Baby Dams to Save the Mother Dam: Ethiopia’s Option 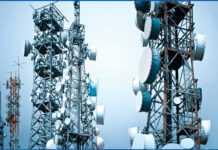 Attracting FDI could become an issue in Africa, report states