African migration in the 21st Century takes place mainly by land, not by sea. African migrants’ destinations are overwhelmingly not to Europe or North America, but to each other’s countries. Those are among the historic findings of the study, Africa Migration Report: Challenging the Narrative, released on 15 October by the International Organization for Migration (IOM), and the African Union Commission (AUC). The work is the first continent-specific report on migration and is being released during a virtual meeting bringing together policymakers, experts on migration and UN partner agencies. This inaugural edition attempts to unpack commonly held misperceptions about migration in the continent. The AMR is modelled on the IOM flagship World Migration Report produced bi-annually since 2000.
“This report has become even more relevant for us to read in the context of pandemic and particularly meaningful given that the lion’s share of African migration remains within the continent,” IOM Director General António Vitorino said in his opening remarks. “It reminds us how migration is integrated into every aspect of our societies and economies. It reinforces the critical need to include migrants into our responses to multifaceted crises, and in all our public policies. And it forces us to look beyond the problems of today, and consider where the challenges, and solutions, of tomorrow might be found.”

UNAIDS calls on countries to step up global action

Zayed Sustainability Prize 2021 calls for submissions from Innovators in Ethiopia

Ethiopia in a do-or-die showdown against Sierra Leone today 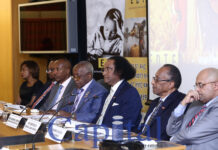 Amole and Africa’s Talking: Revolutionizing digital payments in Ethiopia through a...