South Africa’s foreign minister said Monday that the Australian government had retracted comments by its home affairs minister suggesting that South Africa was not a “civilized country” because of its treatment of white farmers. In March, the minister, Peter Dutton, said that “persecuted” South African farmers deserved the protection of a “civilized country” – alluding to Australia – and said he would explore the possibility of fast-tracking refugee visas for them. The South African government has been considering a constitutional amendment to expropriate farmland without compensation to its owners to address racial disparities in the country. Mr. Dutton’s comments, as well as his suggestion that the farmers faced a “horrific circumstance,” drew fury in Pretoria, where government officials quickly demanded a retraction.

UNAIDS calls on countries to step up global action

A violin wizard on stage in Addis

Patriotic Ginbot 7 decides to return home within a month 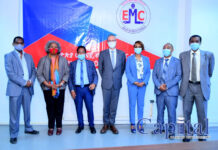