The final step to free our nation from the manipulation of Egypt!

Poetry is the Medium of Realizing Revolution 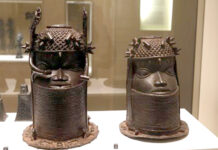