Organisers of the BMW Berlin Marathon have announced that Kenenisa Bekele has joined a loaded men’s field for the IAAF Gold Label road race on 29 September.
Bekele is one of the greatest distance runners of all time. Along with his three Olympic gold medals, he has amassed 17 world titles on the track, indoors and outdoors, and cross country. His world records for 5000m and 10,000m have stood for 15 years.
He stepped up to the marathon in 2014 and set a course record of 2:05:04 in Paris on his debut at the distance. He set a personal best of 2:03:03 – which, at the time, was an Ethiopian record and just six seconds off the then world record – when winning the Berlin Marathon in 2016.
On 29 September he will line up against compatriots Guye Adola, Leul Gebrselassie, Sisay Lemma and Birhanu Legese in what looks set to be another memorable race in the German capital.
Kenenisa won the 2016 Berlin Marathon in a time of 2:03:03 which set a new personal best time for him at the Marathon distance and the second fastest marathon of all time. However in 2017, attempting to break the world record, Kenenisa dropped out of the Dubai Marathon after the half way mark due to a fall at the beginning of the race. Back to half form Kenenisa finished second in the 2017 London Marathon finishing in 2:05:57, 9 seconds behind winner Daniel Wanjiru. Once again in the lineup he finished sixth in 2018 London where Eliud Kipchoge won in 2:04:17. Kenenisa Bekele also ran the Amsterdam marathon in October 2018, but dropped out with about a mile or 1 km to go.

Poetry is the Medium of Realizing Revolution 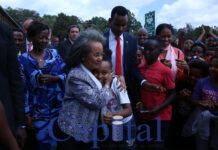 Saint George: chasing the title without a strike force!