A number of Premier League clubs are keen to establish a finishing date for the 2019/20 season
Several Premier League clubs are expressing a desire for the 2019/20 season to come to an end by June 30th, rather than delaying the finish indefinitely.
Football across the UK is currently suspended indefinitely due to the coronavirus pandemic and there is no clear plan for how the 2019/20 season can be completed, if at all.
However, while the Premier League and Football Association are keen to conclude the campaign by extending the season into the summer months, several Premier League clubs are uniting with a different stance.
The Mirror reports that at least nine clubs have had serious discussions amongst themselves and will come together to present their case to the Premier League on Friday, as they call for the season to be curtailed – rather than risk the “huge uncertainty and utter chaos” of allowing it to drag on for months beyond the summer.
Their proposal is to find a formula to finish the season as declaring the campaign null and void is off the table, with the plan to find a scenario that would allow Liverpool to be crowned champions, European spots to be decided and the relegation battle to be settled.
The concerns stem around the fact that numerous players see their contracts expire on June 30, while a number of clubs have commercial deals that are coming to a close on the same date.
FIFA have been discussing ways round the huge contract issue for players who become free agents but clubs fear it would not stand up to a legal challenge, while believe that could seriously affect the whole integrity of the League if clubs suddenly lose a number of their players.
The clubs are insisting that it is time for a serious debate to allow them to plan with some degree of certainty for next season, as there is currently huge question marks about the end date of the 2019/20 season, the start of the new campaign and how the summer transfer window fits in.
It is not only player contracts and transfers that are affected though, as the uncertainty is causing strain for ticket sales, sponsorship and TV payments – which many clubs rely on to keep above water.
They believe a deal could be brokered with TV companies to offset the cost of the current contract by showing more games next season or reaching a compromise with key broadcasters Sky and BT Sport.
(ECHO)

Out of the blue Essayas Jirra voted EFF’s new President

Digital in 2018: Report shows fast growing internet use in Africa 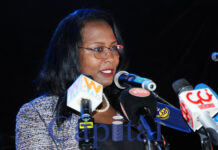 Ministry set to collect 3.8 trillion birr by 2030 from tax