A flurry of nearly 200 COVID-19 vaccine candidates are moving forward through the development and clinical trials processes at unprecedented speed; more than ten candidates are already in Phase 3 large-scale trials and several have received emergency or limited authorization. Also unprecedented is the number of advance market commitments (AMCs) made by countries and multilateral partnerships eager to reserve vaccine supply, even before any candidates are on the market.
A team of experts from Duke University has aggregated and analyzed publicly available data on vaccine procurement and manufacturing to track the flow of procurement and better understand global equity challenges. They developed a data framework of relevant variables and conducted desk research of publicly available information to identify COVID vaccine candidates and status, deals and ongoing negotiations for procurement and manufacturing, COVID burden by country, and allocation and distribution plans. They have also conducted interviews with public officials in key countries to better understand the context and challenges facing vaccine allocation and distribution. Andrea Taylor, MSW is Assistant Director of Programs, Global Health Innovation Center, at Duke University. Andrea Taylor leads a portfolio of global innovation programs focused on evaluation, scaling, and adaptation of healthcare innovations to address critical access and quality challenges. Her research and implementation work drive evidence-based recommendations for scaling transformative models of care, adapting models into new contexts, and facilitating system change. She is based in the UK and serves as the primary UK and European contact for both the Duke Global Health Innovation Center and its sister organization Innovations in Healthcare, working closely with colleagues in the US and Kenya. She discussed the outcome of the data and how countries like Ethiopia will not get COVID vaccines on time with Capital. Excerpts;

Capital: Your new assessment shows that high-income countries, as well as a few middle-income countries flush with manufacturing capacity, have already purchased nearly 3.8 billion doses of COVID vaccines, with options for another five billion. What is the impact for low-income countries?

Andrea Taylor: Our analysis indicates that there are four factors that have allowed countries to secure pre-orders of COVID-19 vaccines: capacity for vaccine development in-country, capacity for vaccine manufacturing in-country, large investment of public dollars into the development of COVID-19 vaccines, and purchasing power to make large orders that assume some level of risk. It is primarily high-income countries that have most or all of these factors and have been able to secure enough doses to cover their entire populations (in some cases several times over). There are some middle-income countries that are able to leverage their vaccine development and vaccine manufacturing capacity to secure pre-orders. Some other middle-income countries that do not have any of these factors have been able to support clinical trials and use that to leverage purchase deals. But our analysis shows that low-income countries have not been able to make any pre-orders and are losing out.
Most low-income countries, like Ethiopia, are depending entirely on the COVAX Facility to receive COVID-19 vaccines. Because of manufacturing constraints, the advance market purchases made by other countries reduce the number of doses available to partnerships like COVAX that are committed to equitable access for the least developed nations. This will make it more difficult to ensure that low-income countries receive initial doses to cover frontline workers and high-risk populations at the same time as wealthier countries. It will also likely mean that low-income countries are waiting longer before their entire populations can be vaccinated.

Capital: An ambitious effort to create a global system of vaccine equity is being undermined as a handful of countries—including those who made a commitment to equality—secure as many doses as they possibly can, which countries are to blame? 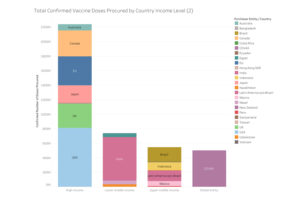 It is also important to note that the EU, Canada, and the UK have invested in the COVAX Facility in addition to making direct deals (while the USA has not). India has also committed to prioritising low- and middle-income countries through its manufacturing capacity.

Capital: How could this greed from high income countries delay access to COVID-19 protection across large regions—including sub-Saharan Africa—until almost the middle of the decade?

Capital: The data reveal that several COVAX signatories, including the United Kingdom (UK), the European Union (EU) and Canada, are effectively undermining the pact by negotiating “side deals” for large vaccine shipments that will “result in a smaller piece of the pie available for equitable global allocation.” What are your comments?

Andrea Taylor: It is understandable that countries are acting in their national interest; they are incentivised to focus first on the safety of their populations. But globally, this leads to a pattern of behaviour that will leave some countries with little to nothing, deepen existing inequities, and prolong the pandemic.
The COVAX facility is our best opportunity to ensure global access for three reasons. First, it mitigates risk by investing in a portfolio of vaccine candidates to maximise the likelihood of having one or more succeed through the regulatory process. Countries are doing this individually, but it is generally only high-income countries that can afford large orders of multiple vaccines. For the rest of the world, COVAX’s portfolio approach is critical. 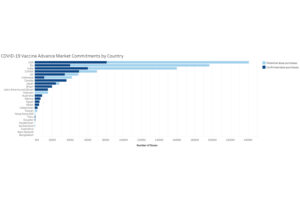 Second, the COVAX Facility, through partners CEPI and GAVI, can reserve manufacturing capacity globally without tying it directly to a specific vaccine, ensuring that there will be capacity to ramp up production once a winner is identified.
Third, and this is most critical for equitable access, COVAX can function as an air traffic controller, ensuring that vaccines ship out to all countries at the same time, rather than the first doses to the highest bidder. Through COVAX’s coordination, all participating countries can receive initial doses to vaccinate frontline workers at the same time. Without COVAX, there is no global coordination of distribution as doses become available.
COVAX can also ensure that, if multiple vaccines are successful, they are deployed in a best-fit approach. This means that if one approved vaccine is single-dose and requires only standard refrigeration cold storage, while another approved vaccine is two-dose and requires freezer storage, it will be most efficient to allocate the single-dose vaccine to low-income countries and ship the two-dose vaccine to countries that have stronger cold-chain infrastructure and tracking systems to ensure the two doses are implemented as required. Without COVAX, however, there is no coordinating body to ensure this happens, increasing the chance of wastage.

Capital: The analysis shows that not a single low-income country has made a direct agreement to purchase vaccines, suggesting that low-income countries will be limited to the COVAX pact to secure vaccines. How can this be changed?

Andrea Taylor: Regions at risk of not having enough vaccines could potentially coordinate to increase their leverage and purchasing power, as the African Union and African CDC are doing now with a ‘whole Africa’ approach. We are also seeing this happen across Latin America.
In addition, though our research points to the need for high-income countries and multilateral funders to unlock additional manufacturing capacity (particularly in the Global South) and invest in preparing countries for effective distribution of vaccines. High-income countries should also work with COVAX, as a global coordinator, to ensure that, once their populations are covered, excess doses are redeployed where they are needed most around the world.

Capital: The researchers found that Ethiopia, Africa’s second largest country, is counting on COVAX for enough vaccines to cover 20% of its population and has no avenues to secure additional doses, what does this mean to the country?

Andrea Taylor: We don’t know yet but are investigating this further as the landscape continues to change. It appears to mean that Ethiopia is at risk of not having enough vaccines to cover its population until after higher-income countries are covered. But this may change with additional manufacturing capacity (particularly within Africa) and additional investment in partnerships like COVAX. Mali’s Traore out to make his own name